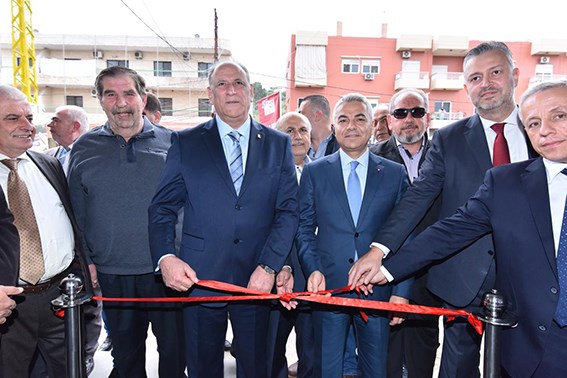 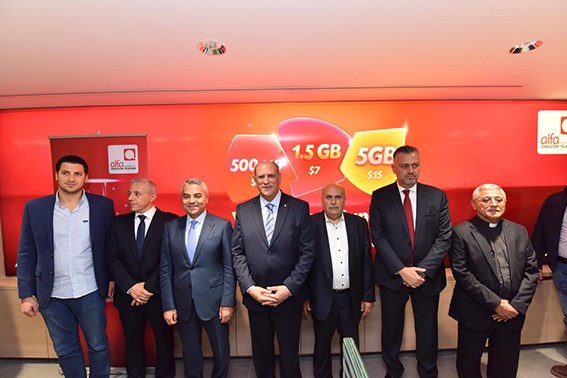 Under the patronage of the Minister of Telecommunications Jamal Jarrah, Alfa, managed by Orascom TMT, opened its new store in Miniara as part of its plan to strengthen its presence in all the Lebanese regions, in line with the needs of its subscribers and its commitment to innovation.

The opening was attended by Alfa CEO and Chairman Marwan Hayek, MPs Hadi Hobeish, Tariq al-Merehbi, and Mustapha Ali Hussein, in addition to the governor of Akkar, Imad Labaki, Monsignor Elias Gerges, the head of Al Shift Municipal Union and Miniara mokhtar Antoun Abboud, in addition to heads of municipalities and public figures.

After cutting the ribbon, the attendees toured the different sections of the store, which was equipped with the latest equipment to provide the best service to customers.

In his speech, Hayek thanked Minister Jarrah for his patronage and presence, and welcomed the attendees. “Our hearts belong in the North, in this special region of Akkar, and we are not only here to open a new branch. To me, this is a return to my roots and to the good people, and I look forward to giving back some of what I received from this region, where I was born and raised. It is a return to my family and my region, to which I’m proud to belong,” he said.

Hayek then went on to talk about his childhood and early years from the primary school in his village, to his middle and high school years at the official Halba high school in Miniara, which then led him to complete his university education and start a fulfilling career around the world in the telecom sector.

He said, “I returned to Lebanon, to my beginnings, and today is very emotional day for me here in Akkar. Our presence at the opening of this branch in Miniara is proof of our commitment to everything we announce about our expansion plans in Alfa. We implement even before we speak, and this branch is part of our expansion plan that began in Jeb Jannine and Chtaura, then Unesco in Beirut, followed by Tripoli. Here we are today in Miniara for the opening of this unique center with the best quality of service that can be provided to 200,000 Alfa subscribers in Akkar, who represent 10 percent of our subscribers in Lebanon. In addition to being a repository for the Lebanese army, of whom we are extremely proud, this region is also an important repository for Alfa, and this makes me very proud on a personal level, especially that we have half a million subscribers in the North.”

“Most importantly, out of the 15 highest consumption sites in Lebanon, 4 of them are located in Akkar which cater for users internet consumption and the U-Chat services with 50 percent of users being from Akkar which is an important indicator,” Hayek added.

“When I started working at Alfa in 2010, there were 24 sites covering Akkar. Today, there is a total of 74 sites where 50 new sites were installed. By the end of 2019, we will add 42 new sites, to reach 117 stations that ensure the best coverage for Akkar. This is part of our expansion plan that was endorsed by His Excellency Minister Jarrah a year ago, leading to an increase of 500 stations across Lebanon. It should be noted that Akkar is the region that received the largest number of sites.” “Deficiencies or gaps, if any, will be addressed in the near future, and all regions across Lebanon will benefit from coverage with the same quality and services.”

In the end, Hayek thanked all those who contributed to the implementation of this project and other projects in Lebanon. “Our services will continue moving forward. We promised that 5G will be available in Lebanon next year. 5G will not be limited to one region but will extend to all Lebanon including Akkar.”

“We love Akkar and its good people, who are characterized by their sense of nobility, dignity, and belonging to our dear country. Our plan is to reach all the regions to provide the best service, and Akkar is very dear to the heart of Mr. Hayek, who will not content himself with this center. Many other such quality centers will be opened in Akkar to save time and hassles for citizens. Our new policy is to go to citizens wherever they are to be closer to them, and introduce them to all the recent innovations.

We may have been late in reaching Akkar, but Mr. Hayek has pledged to you that we will stand by you and by citizens across Lebanon to provide the best services in line with Alfa’s expansion plan that serves the goal we set, which is to be close to you.”

“The plan to improve coverage has begun to be implemented quickly, including the establishment of the necessary towers in the area to ensure optimal coverage and communications. This is in addition to the new products that Alfa is planning to put on the market and offer to its subscribers thanks to Mr. Hayek, who has never forgotten that he is from Akkar, this region which he keeps in his heart. We support him in his expansion plan for the North and for Akkar to serve the citizens”. “Thank you all and a special thanks to Mr. Hayek, who proves day after day his ability to make the right decision at the right time and with the right execution”, Jarrah concluded.