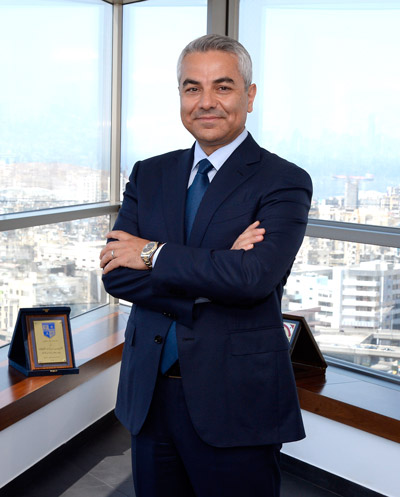 Marwan Hayek took the helm of Alfa, the first Lebanese mobile operator managed by Orascom Telecom Media & Technology (OTMT), as its Chairman and CEO, since March 2010, putting his international experience at the service of the Lebanese telecom sector, by introducing state-of-the-art technologies and bringing Lebanon back on the regional and international telecom map. Under his leadership, Alfa led the introduction of the 3G+, 4G and 4G LTE-A technologies in Lebanon and was the first operator to launch first 5G trials and Artificial Intelligence capabilities in Lebanon in 2018.

Marwan Hayek is an experienced telecom executive with over 24 years of field and operations experience. Mr. Hayek started his career with France Telecom in Lebanon – Cellis, known currently as Alfa, where he was part of the initial team that built the first GSM network in Lebanon, before joining later on the Orascom Telecom Holding (OTH) family back in 1999.

Since 1999, Hayek has held several assignments within the Orascom Telecom Group's subsidiaries and its Holding, the latest before his current appointment was in September 2007, where he joined Mobinil (Orange Egypt) that has more than 30 million subscribers, as VP Technology in charge of both network and IT infrastructure. With the winning of the Management agreement of Alfa by Orascom Telecom, in February 2009, and in addition to his position at Mobinil, Hayek was appointed on the Board of MIC1-Lebanon and Orascom Telecom Lebanon.

Mr. Hayek holds a master’s degree in Telecommunications and Electrical Engineering from the "Faculte Polytechnique de Mons" in Belgium. He had attended and participated in several technical, IT and Management trainings including but not limited to CCL, MEIRC, HEC, INSEAD, IMD, MIT & Harvard.

Mr. Hayek is a member of the UN Global Compact Lebanon SDG Council as a Goal Leader of SDG #9: Industry, Innovation and Infrastructure. In February 2018, he was elected on the Board of Directors of SAMENA Telecommunications Council. In an honor considered the most prominent in his pioneering career, Hayek received the Order of Saint Sylvester Pope and Martyr - Commander class granted to him by his holy Pope Francis, in recognition of his contributions to the Church and public achievements.

Mr. Hayek has so far received several Industry awards in recognition of his contributions to the telecom sector’s development in Lebanon and the MENA region, among of which: