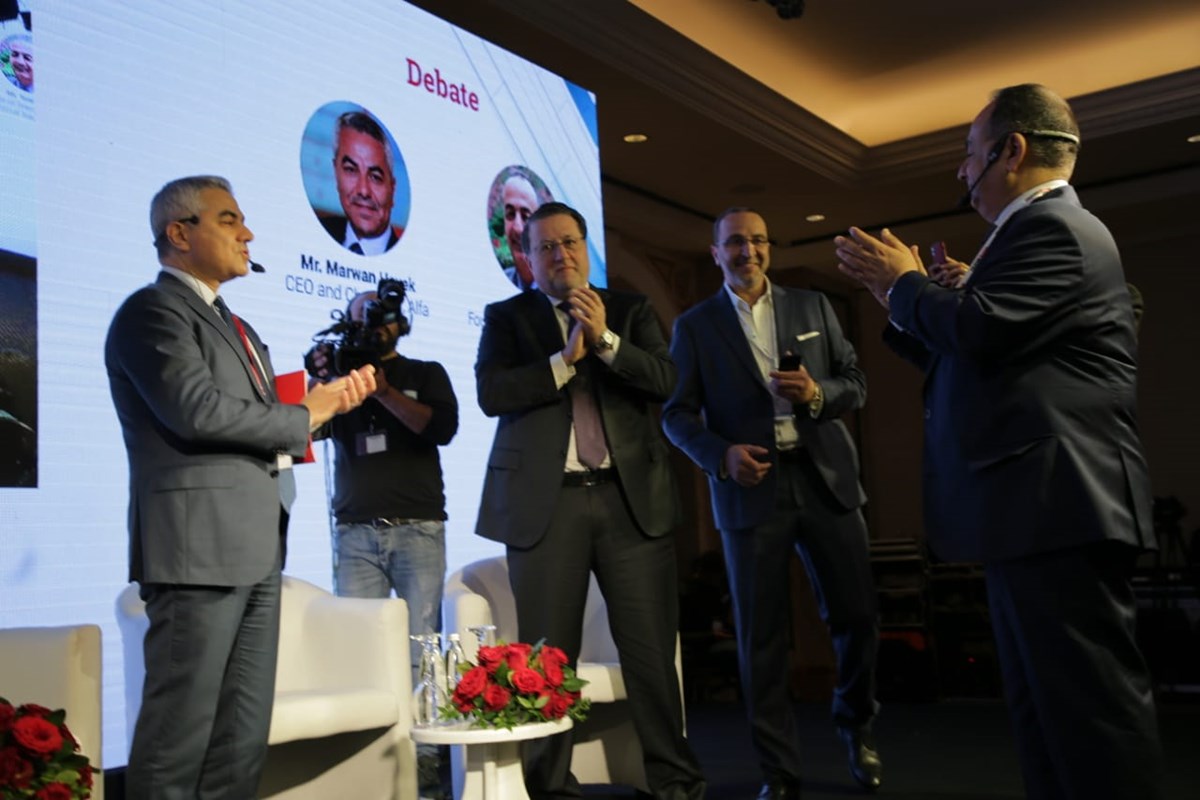 Beirut – Lebanon, March 29, 2019: The Telecom Review Summit was inaugurated at the Phoenicia Hotel in Beirut under the auspices of Prime Minister Saad Hariri, who was represented by Minister of Telecommunications Mohamed Choucair. The event was attended by Alfa Chairman and CEO Marwan Hayek and telco executives from Lebanon and the region and several other figures.
During the summit, the first real live demo was made on a 4G- capable commercial device via Alfa’s 4G LTE advanced network achieving an unprecedented speed of 1 gigabits/sec for the first time in Lebanon and the region.

Choucair
Following the Lebanese national anthem, Minister Mohamed Choucair delivered his speech:
“Prime Minister Saad Hariri asked me to represent him at this special conference and wish you success in achieving the desired objectives.
I would like to praise Telecom Review and its Chairman Mr. Tony Eid for his determination to organize this prestigious conference every year, which is quite successful in terms of attendance, local and international participation, as well as the topics discussed and their importance in the development of our national economy”.
“We take this opportunity to reaffirm our support for this type of conferences, as they help bring the latest innovations in the ICT sector to our communities, economic sectors and businesses, and restore Lebanon's leading position as a hub for regional and international conferences.”
“Undoubtedly, the move to digital economy is a key objective for the Lebanese government and the Ministry of Telecommunications as it is one of the best means of achieving sustainable economic growth. However, it is impossible to enter the digital world and take advantage of all its features without establishing a relevant modern infrastructure”.
“Thus, the Lebanese government has decided to respond to these various needs. Since the Ministry of Telecommunications places this at the top of its priorities, it is working on accelerating the fiber optics network, ensuring the wide-spread of the 4G service, and launching the 5G service. Since I took up my duties at the Ministry, I have been holding frequent meetings with companies committed to setting a timetable for extending this network, and I will announce this at a press conference soon. I should also stress that PM Hariri continuously monitors progress at this level and encourages all initiatives and projects aimed at developing the sector”.

Dear Audience,
“The Lebanese government aspires to be part of the digital world and the digital economy today.
God willing, we will succeed in our endeavour, especially since we have all the necessary components, namely the Lebanese brains, which have proved successful both at home and abroad, as well as the highly competent and creative Lebanese youth.
I believe in the Lebanese private sector, which has a high capacity to emulate all the global developments in our country. We are also counting on start-ups to make progress in this regard, as they have already succeeded in consolidatingconsolidating their position, supported by the initiatives of the Ministry of Telecommunications, especially the establishment of a fund to stimulate these companies. This is in addition to the initiative of the Central Bank among others”.
Choucair concluded by saying, “I’m pleased to announce that the focus in the next phase will be to establish the necessary legislative structure to build a healthy digital society and economy, especially in regard to the protection of information and personal data”.

Hayek
In a dialogue during the summit, which was moderated by Trace Media CEO and editor-in-chief of Telecom Review magazine Tony Eid, Hayek pointed to the importance of this summit in highlighting the reality of the telecommunications sector in Lebanon and Alfa’s pioneer role. “We have always been a source of positive news in Lebanon, which has characterized our path since the company was established 25 years ago. We are now in the ‘catch me if you can’ stage, which has been ongoing since 2009 thanks to the technological achievements we have made which included the launch of 3G and 4G, and soon to be followed by 5G”. Hayek pointed out that 5G is no longer in the distant future but it is a reality and we are awaiting as the fiber optics network completion. Regarding Alfa Sports, he noted that the launch of the application represents the official entry of Alfa into the world of applications, which dominates user trends. It is expected that more than 260 billion applications will be downloaded by 2022. Hayek pointed out that applications consumption accounts for 50% of the total data consumption on the Alfa network, adding that this pioneering project was a rescue venture for Lebanese sports that was achieved via the Alfa network, thanks to its full readiness and speeds that rank third in the region.
At the end of the dialogue, and for the first time in Lebanon, a real demo on the live Alfa 4G LTE advanced network was conducted by Hayek on a 4g capable smartphone in cooperation with Nokia. The maximum speed of 1 gigabits/sec was achieved for the first time in Lebanon and the region. The Alfa network supports speeds of up to 2 gigabit/sec, but to date there are no smartphones in the market that can operate at these speeds that Alfa offers.
The dialogue featured a live demonstration of Ericsson's Music Connect service, which premiered for the first time in the Middle East after the Mobile World Congress in Barcelona. The show showed musicians playing together from different locations at the same time, thanks to 5G's tremendous ability to achieve a latency of only 1 millisecond. This achievement is an embodiment of the services Alfa will provide via 5G in collaboration with Ericsson.